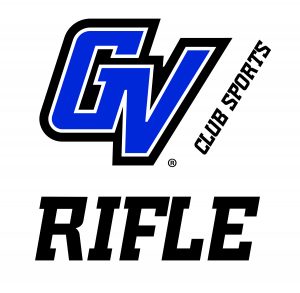 The mission of the GVSU Rifle & Pistol Club is to provide all students with the opportunity to participate in shooting sports, with an emphasis in three-position smallbore rifle, international air rifle, and air pistol. Regardless of skill or ability, all members can have a safe and enjoyable time interacting with fellow students and engaging in marksmanship. All equipment is provided, including guns, ammunition, and targets.

The club does not hold tryouts. New members, regardless of experience, are welcome year-round. Questions regarding club membership can be directed to Head Coach Cameron Zwart.

The club meets on Tuesdays from 3:00 PM – 7:00 PM and Thursdays 5:00 PM – 10:00 PM during the school year and regularly during the summer. Practice attendance is not mandatory to be a member of the club; however, regular practice attendance is expected. In shooting, it’s persistence that pays the biggest dividends—constant, steady practice, week in and week out, all year long.

The rifle team is a member school of the Western Intercollegiate Rifle Conference. In the regular season, the schools compete in monthly postal matches (October-January). A postal match is a competition in which competitors fire separately on their home ranges and exchange scores. Five shooters are predesignated by each team with the top four individual scores contributing towards the overall team score. The conference championship match is hosted by a member school in February. An intercollegiate rifle club national championship is held in March. The team participates in various other local, regional, and national matches hosted by the American Smallbore Shooting Association (ASSA), Civilian Marksmanship Program (CMP), National Rifle Association (NRA), National Rifle League (Vermont Winter Postal League), and USA Shooting (USAS) throughout the year.

The 2021-22 season will be the inaugural for the pistol team. The team will join Orion’s National Air Pistol League. The 11-week league runs from January to April. All team members shoot the league matches with the top four individuals contributing to the team’s aggregate score. The team will participate in various other local, regional, and national matches hosted by the Civilian Marksmanship Program (CMP), National Rifle Association (NRA), and USA Shooting (USAS) throughout the year.

Paralympic shooting, also known as shooting para sport, is an adaptation of shooting sports for competitors with disabilities. The rules governing Paralympic competition are those used by World Shooting Para Sport. Those rules take into account the differences that exist between disabilities allowing ambulant and wheelchair athletes to compete shoulder to shoulder. The shooting disciplines match athletes of the same gender, or occasionally both genders, with similar disabilities, against each other, both individually and in teams. Paralympic shooting competition is open to male and female athletes with physical disabilities such as amputation/limb loss, spinal cord injury/wheelchair-users and cerebral palsy/brain injury/stroke. Depending on the existing limitations (degree of body trunk functionality, balance while seating, muscle strength, mobility of both upper and lower limbs), and on the skills that are necessary in Shooting, athletes are divided into three classes:

SH1: Pistol and Rifle competitors that do not require a shooting stand.

SH2: Rifle competitors who have no ability to support the weight of the air rifle with their arms and therefore require a shooting stand.